4 hours away from Hanoi, just before the border with Laos, is a place called Mai Chau. Nested between high peaks, where greens grow as a shelter to thousands of butterflies and, I assume, snakes. There, the cracking bamboo never stop telling stories; buffalos and cows swim in the river to cool off after a hard working day; chicken run free with their big families; houses are on stilts as most of the land is flooded and everyone rides a scooter.

The day starts at 4.30 am, when the roosters start ‘’singing fighting’’. Each property around the rice field has his own poultry, and when the first one calls his humans to work, the others chicks on duty will tireless try to outperform the first caller. Men and women are already at work for a long time when the proud chicks finally calm down; and it is then about 6 am.

In the field of irritating noise pollution, I finally understood today the meaning of all the honking on the roads. As traffic regulations do not have much value here, drivers made up their own language. 2 horns, I am passing you; 3 I am giving you the space to go, 1 might be a simple greeting (they sure are polite in Hanoi)…  Honking is good, honking save lives. I cannot pretend I like it but at least I know the motivations behind the frenetic honking attitude.

In my bungalow made of bamboo and holes, I made some interval sleeping. As beautiful and peaceful as the place can be, I could not stop thinking of ways the spiders would find to go under my insect nest to basically eat me alive. Spiders are big over there, as small puppies basically.

Eventually, I got some rest, much needed after a day cycling through villages and rice fields. That was Saturday, after we drove from Hanoi and had the tastiest Vietnamese meal. It was so hot my camera decided to go on strike – cannot blame her (yes, it’s a she). As we were cycling up and down the rice fields, on red dirt and grey stones, I just did not know where to look anymore. In the background, gigantic mountains made of dark rock, covered in glorious green trees. At their feet, bowing to their stunning beauty, kilometers of rice fields. In there, shadows with pointy hats keep themselves busy, continuously, in a burning sun. Ducks, geese (sorry M), buffalos and chicken share the muddy playground. When the sun is at its zenith, everything slows down. The movements are the same, only time stretches. So do we, around 4.00pm, when we make it back to the main village. Nothing like stretching your elbow with a nice fresh beer… 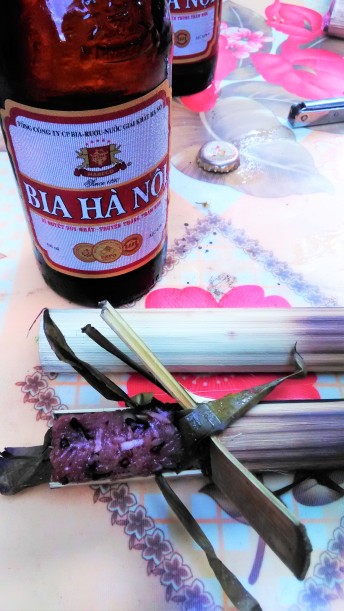 This is when we decide to change the program of day 2: we forget the idea of trekking in the bamboo forest, in the heat, in the mud; and decide to go look for the Go Lao waterfall instead.

The morning after it does not take long before the bumpy road fully awakes our sleepy heads. After about 25 minutes drive in the most beautiful scenery, we arrive at Go Lao. It is a popular place for the local teenagers: a dozen of them already play in the water. We join them, climbing on rocks, sitting in the waterfall, and swimming in the natural pool… all around us in pure, quiet, savage.

Vietnam abounds in wonders: I am astonished, not only by the beauty of its pure nature; but also by the spirit of its people. Acceptance and creativity: they do not complain, and they make miracles out of broken pieces. They do not waste anything either let anything die. Same goes for their food actually: when doing the market, you would buy your poultry and fish alive for most of the time. You kill what you really need to kill, at the exact moment you need it dead. Only the meat – including dog’s meat… – is sold in pieces.

Another great life lesson I owe to Vietnam occurred to me today. For my last day in Vietnam, I took a bus to what they call ‘’the Halong Bay on land’’. My guide, whose name means ‘’good scent’’ introduced in the most perfect way to Vietnamese culture. We visited 2 temples, in what used to be the capital of Vietnam. The place is a maze of low river, high rocks, caves and flooded fields. It was the perfect place to hide from the villains (the Chinese neighbor). Two temples have been erected by the people, in the middle of the jungle, to honor the Kings and their Queen. The Queen was once in love with a soldier, but before she could marry him she found herself chosen by the King. No question, they married. 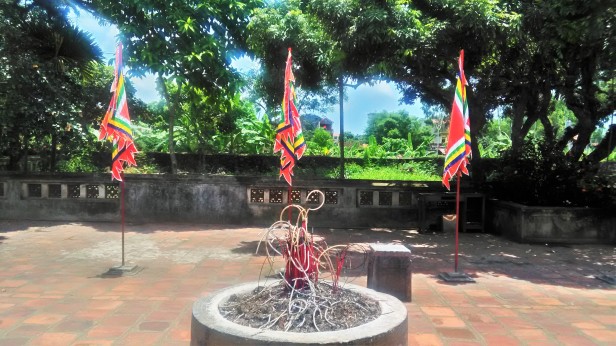 As a matter of fact, in some Vietnamese cultures, men hid in the woods waiting for the women to pass by. Once their chosen one walks by, they spring out of the bushes, wearing a traditional mask. They are entitled to kidnap the woman (or girl) of their choice, keep her locked up for 7 days to finally decide if they want to marry her. Good to know before going on a trek. If the Little Red Riding Hood would have taken place in Vietnam, things could have turned very differently!

So our Queen marries the King, who eventually dies. His body was buried somewhere in the property, by his 7 disciples. All of them committed suicide right after the ceremony, keeping the grave location secret from everyone, forever. Up to today, the body of the King has not been found… Because the Queen needed to transfer the royalty to a man, she could re-marry. Happy ending. In order to honor those Kings and Queen, the people of Vietnam built a double temple: the first one dedicated to the prior King obviously has to be more majestic than the other one. All the dragons gather around the first temple; but the Queen is in the second temple. Twice a year, her statue is moved to the temple of the first king and left there for 1 day and 1 night before it is brought back to the second temple.

Temples are not a place of religion as per definition. They are a place where all Vietnamese meet and pray, to their heroes, for prosperity and success. Buddhist will pray religiously at the Pagoda, and Catholics would go to Church. But temples are a place where everyone is welcome, where all ethnic groups gather and celebrate their national treasure and heroes. How beautiful is this? Religion is never denied, but unity is just given the priority; above beliefs. This is how I read it at least, and it pleases me.

Falling every minute a little bit more for Vietnam, I pursued my adventure in the rowing boat. Cruising through rice fields, water lilies and caves; I was once again impressed by the good heart and the ingenuity of the ship’s captains. A ballet of small barks led and controlled by local men and women; too happy to show us around – and to practice the little French they have learn over the years. It looks like huge rocks are floating around in this flooded area, where rice and lotus flowers live together. It is stunning, from this point of view; and not less pretty from the bike pad we cycled on a bit later. Vietnam is one big messy playground, where everyone and everything runs free. I feel a bit dizzy, and I do not know any more if I should blame it on the heat, the busy-ness, the excitement… I decide to not blame it on anything and to live fully this state of daze. Vietnam is apart and I am amazed. Holding on that thought, I fell peacefully asleep in the bus back to Hanoi. 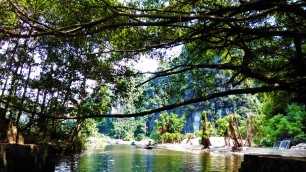 Waking up a few kilometers before the end destination, I have a last chat with my sweet guide. She is wearing a full outfit, hiding from the sun, and explains how hard she tries to avoid getting her skin darker. This is just funny how we always want the opposite of what we have. We, back in Europe, want a darker skin when people here try to bleach out their natural color. Talking about life, struggles and goals; she hands me over a book she just finished reading. She insists I take it as a gift. ‘’A frog in search of a New Pond’’. She concludes this perfect day sharing her story with me: ‘’I cannot be controlled, I need to do what I believe in and all I ask from the people around me is to support my choice whether or not they understand me. Sometimes, I just wish they would listen instead of talking me into their own molds. It is so important to have your own life.’’

Strongest women I have met so far are born in Vietnam. I bow down and I preciously carry with me life lessons on freedom, humility and community.

It is always when comes the time to leave that I appreciate all the value of the places I called home for a few nights. Luckily, I have another home to discover tomorrow – first in Bangkok, then in Kanchanaburi for a week. Bring in on!